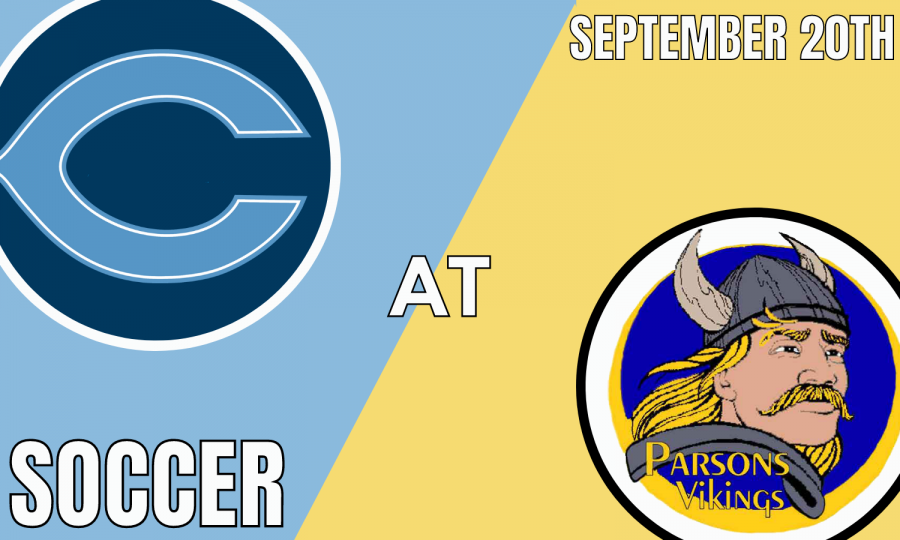 For the second time in four days, the Chanute Blue Comets’ soccer team played the Parson Vikings. Parsons evened all-time series at one a piece, beating the Comets 5-4 behind two goals from senior Gianluca Piano.

After a 5-0 loss to Chanute on Thursday, the Vikings came to play. Piano started it off with a goal in the 12th minute. However the Comets quickly mounted a comeback on the shoulders of freshman Eli Uhner. In the 15th minute Uhner tied the game and then less than a minute later he put Chanute ahead 2-1.

Chanute’s momentum would then come to a screeching halt. Piano scored his second goal in the 32nd minute to tie the game. Then just moments after halftime, junior Mason West put the Vikings’ third goal on the board. Parsons leads 3-2.

“We just started coasting. We saw ‘oh we can just cut through these guys and score whenever we want to’ and we just assumed it was going to happen all 80 minutes. We just jogged to some scores and it didn’t work out,” Chanute’s head coach Adam Wilcox said on the momentum swing.

In the 54th minute Parsons earned another goal, this time off the foot of senior Paxton Swanson. Just three minutes later the Blue Comets would finally get their offense going as senior Walker Becknell knocked one in. The Vikings’ final goal would be scored by Eli Koger in the 64th minute. Parsons would hold on defensively until the 18th minute when junior Sonny Padilla put up Chanute’s final goal in the 80th minute. That wasn’t enough and the Comets lost to the Vikings 5-4.

“We stopped trying from Thursday to today. We know that we saw a team that we’re better than, so we thought we could just jog everywhere and beat them by being more skilled as players and that clearly didn’t work,” Wilcox said.

“Eli looked good, he gets lost a little bit but he had some nice finishes. He feels comfortable in varsity. Dash, he had really good effort for the game so that looked good,” Wilcox said.

This marks the second game in which Chanute missed senior goalkeeper Drayton Cleaver and instead played sophomore Kolby Baker. Giving up five never feels good for a GK but the hope is that this game helps develop the young Baker.

“It hurts losing Drayton. On Thursday our defenders played good and our mids played good, and Kolby wasn’t tested much. Today that effort wasn’t there. You hate to put it on Kolby because he’s a sophomore. He shouldn’t be playing Varsity right now, we should have an all-league four-year varsity player,” Wilcox said, “That’s just the difference in skill for such an important position. I know Kolby feels bad, he let a couple go that I know when he looks back in his mind, he’ll think he should have played differently, but that’s part of learning. If he learns from today and that helps him tomorrow and Thursday and next week and next year when we don’t have Drayton at all, then maybe this is a lesson we learn the hard way.”