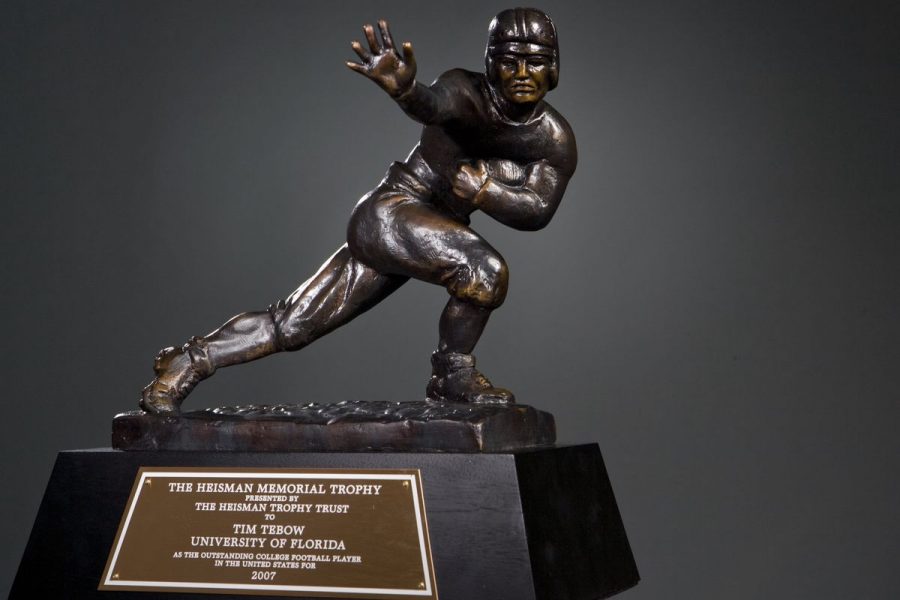 This past Saturday the Heisman trophy winner was announced. The Heisman trophy is an annual award given to the highest performing college football player in the US.
#4 – Justin Fields
Justin Fields came in at 4th place with 643 points and 20 first-place votes. He had the second-most first-place votes but did not receive many second or third-place votes.
#3 – Chase Young
Chase Young had 747 total points with first place votes which was good enough to earn him third place in the Heisman race. I also think him not being in an offensive skill position, primarily a quarterback did hurt his chances at the Heisman trophy quite a bit.
#2 – Jalen Hurts
Jalen Hurts came in second place with 762 total votes and only 12 first place votes. He has put a good season together being a threat with his arm as well as his legs through the air he has 3,634, yards adding 32 touchdowns and 7 picks earning him a td/int ratio of 4.6 with a 71.8 passing percentage and on the ground, he has 1255, yards averaging 5.7 yards a carry and 18 touchdowns on the ground. He reminds me a lot of the way Lamar Jackson plays, he is not as accurate as Lamar, but I definitely think he has huge upside. He could be a top 10 pick in the upcoming NFL draft
#1 –  Joe Burrow
Joe Burrow received the Heisman trophy this past Saturday. He won with an insane amount of first place votes and he had the largest margin of victory for the Heisman trophy ever. He had 841 votes for first place out 885 votes. 10.7 yards per attempt. He had 2,608 total points. Joe burrow threw for 4,715, yards and 48 touchdowns with only 6int his td/int ratio was 8.0 with a pass completion percentage of 77.9 and has 289, rushing yards and three rushing touchdowns. Many people believe Joe Burrow could be the top pick in the upcoming NFL draft. He has the potential to be one of the best pocket passers in the NFL but I don’t think he is going to be the first quarterback picked because the game is revolutionary to scrambling quarterbacks who can make plays outside the pocket, I think that is why Jalen hurts benefits more than Joe burrow with his ability to make plays with his legs. I think Joe burrow will get taken before Jalen hurts but Jalen hurts will have a more successful career.