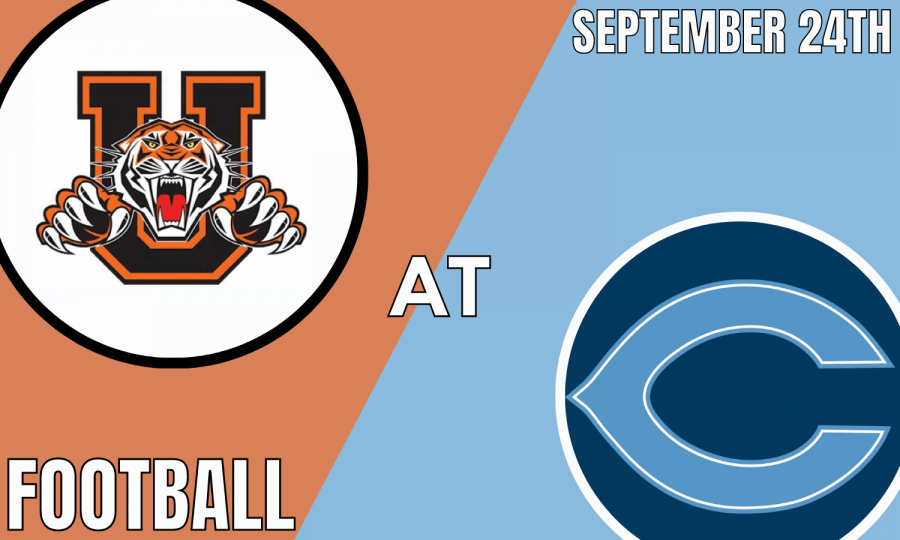 The Chanute Blue Comets’ football team played the Ulysses Tigers on Friday. Chanute won 48-0 in dominant fashion. The Comets were led by junior quarterback Eric Erbe, who went 11/14 for 190 yards and 4 touchdowns.

“[We] talked about how that Ulysses team is a pretty darn good team. Everything went right for us tonight but their run game, they were ranked number one in 4A in running game before tonight and we shut them down,” Chanute’s head coach Clete Frazell said, “It was a scary game for us because they’re a team that can hold on to the ball for a long time and control the clock, and if they score touchdowns you can be in trouble in a hurry. Then the quarter can be gone and you’re down 7-0. It’s a scary team to play for us and I’m glad that we played well and we were ready.”

This game started with a three-and-out from the Comets and a turnover on downs by the Tigers that put Chanute on the Tigers’ 31-yard line.

On 1st down & goal from the four, the Comets’ junior running back Ty Leedy pounded in a touchdown. Senior Kaleb Becannon’s point after attempt was wide right, putting Chanute up 6-0.

After a Ulysses punt, Chanute would put together a one-play, 61-yard touchdown drive, when Erbe hit sophomore Kaiden Seemster for the big gain. The Comets went for 2 and converted when Erbe connected with senior Kam Koester. After dueling drives ending in punts, the 1st quarter would end with Chanute up 14-0.

“[Erbe’s game] was pretty darn good…He started off a little rusty coming off of that injury but he’s hitting his stride now,” Frazell said, “We know he’s capable of being a very very good quarterback and a collegiate level guy. It’s not surprising. I’m glad to see that he’s relaxed out there and playing football like he can.”

Ulysses would punt at the beginning of the second and the Blue Comets would capitalize with another quick hit drive. After two plays, Seemster ran for a 61-yard touchdown. Becannon’s PAT was good, Comets up 21-0.

Seemster would go on to finish the contest with 4 receptions on 4 targets for 84 yards and 1 receiving touchdown. On the ground, he had 4 attempts for 74 yards and a touchdown. Totalling 8 touches, 158 yards from scrimmage, and 2 touchdowns.

Yet another Tiger punt, put Chanute on their own 25. They drove down and Leedy drove in a 2-yard touchdown with 4:09 left in the half. Becannon made the PAT. Blue Comets 28, Tigers 0.

On Chanute’s last drive of the half, Erbe connected with Koester for a 31-yard touchdown. A successful Becannon PAT put Chanute up 35-0.

Koester’s night would end with 5 receptions on 5 targets for 82 yards and a touchdown. He also shared a sack with Junior Dagen Dean as part of a spectacular Comet defensive effort.

“Coach Keeley had our defense ready to roll, and we just played dominant on defense. We had Kolten Lacrone shutting down his side of the field. We had Ty Leedy and Kedric Emling making tons of plays. Trey Dillow did a very nice job outside,” Frazell said.

In the second half, Ulysses continued to stall on offense, and the Comets tacked on 2 more touchdowns. Erbe hit Emling for a 2-yard score and Dean for a 46-yarder. Becannon went 1/2 on PATs for the half and Chanute won 48-0.

“Our quarterback played really well tonight, and after that first drive or so, we got our run game going too. It was one of those nights where you feel good because everything was going well,” Frazell said.