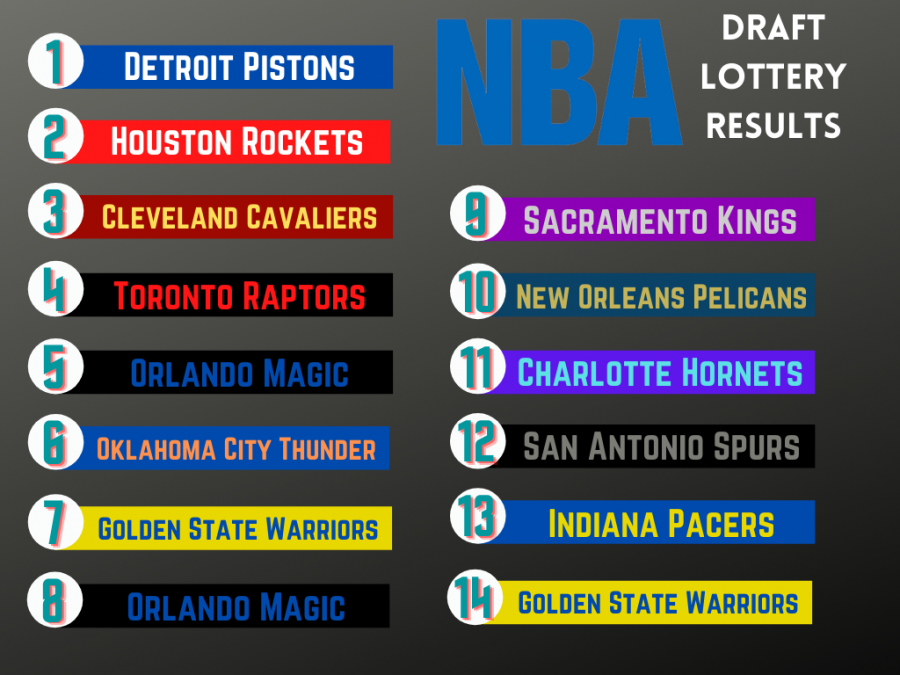 Golden State narrowly missed the playoffs this season. They will be getting star shooting guard Klay Thompson back from injury this season, which should help. The only players hitting free agency are Kelly Oubre jr and Kent Bazemore who are replaceable for all intents and purposes.

The Pacers have a solid team. Solid. Not great. Not a contender. Solid. If I were running Indiana I would look at trading this pick as well as Myles Turner to move up.

The Domantas Sabonis and Myles Turner experiment hasn’t worked. Now’s the time to split that up, Orlando may be a good option considering they have two top 10 picks and traded away Nikola Vucevic at the trade deadline this season. Another option would be the Thunder, who will apparently trade anything if you throw in a second-round pick, which the Pacers have two of this year. Then there’s Cleveland who love centers, so why not?

San Antonio has a lot of money to work with. As it stands, they will have $50 million to spend this offseason. They aren’t in a huge market but they have been a storied franchise over the last couple of decades, which means they may be able to make a splash in free agency.

However, this puts them in a weird spot because this season’s biggest free agent is forward Kawhi Leonard, who doesn’t exactly have a great relationship with the Spurs. That leaves a bunch of old or beat-up guards like Chris Paul, Kyle Lowry, Mike Conley, and Victor Oladipo.

The Spurs’ best bet may be to sign a mid-tier player like Spencer Dinwiddie or Dennis Schoder and use this pick to grab the best big man left or draft whoever they see as the best player left and take a chance on a free agent like Lauri Markkanen.

San Antonio would still probably have a mediocre season next year but these options would give their young guys another year to develop and leave them with enough money to sign a max-contract player in 2022. General Manager Robert Buford has a lot to think about this offseason.

Charlotte lucked out last season when the Timberwolves and Warriors passed up on LaMelo Ball. The hornets need to look to the future with their new star. That means letting Cody Zeller and Bismack Biyombo walk. Then replace them by picking the best center left at this spot and signing another in free agency, such as Enes Kanter or Richaun Holmes.

In my opinion, Pelicans point guard Lonzo Ball has been one of the most surprising players over the last two seasons. His stock is at the highest it’s been since his time at UCLA. He’s going to want money. That leaves the Pelicans with the not-so-difficult decision of paying Ball now or paying Zion Williamson in a couple of years.

New Orleans needs to use this pick to draft Ball’s replacement. It’s going to be hard. No rookie can match the defense and playmaking that Ball brings, but they don’t have many options.

The Kings are kind of just bleh. They have a bad coach and one very good player. Sacramento should use this pick to grab a defensive wing.

With the 12th pick last year, they took Tyrese Haliburton. Haliburton works as a scorer with star point guard De’Aaron Fox. On the other hand, defense is not a strength for Haliburton, who had a -0.9 defensive box plus-minus. This is why a defensive wing would be a good addition to this young team.

Orlando doesn’t have much cap room so this draft will most likely be the biggest acquisitions of their offseason. They have seven players under the age of 24. However, only one of them is a wing. I would use the 5th pick to draft a wing. Then I would field trades for the 8th pick and if there isn’t anything I like, draft the best player.

The Thunder need to draft someone to replace Moses Brown, who they just traded for Kemba Walker, and, of course, two picks including the #16 pick in this year’s draft. I know another team that needs a big, but they’re a hot commodity right now. Don’t expect this draft to change the entire outlook of OKC’s season because they are going to be bad, regardless of what they do here.

The Raptors have had a rough year. I mean, they had to play their 41 home games over 1,000 miles from their typical home city and now it doesn’t look like Kyle Lowry is coming back next season, however, they do have former Wichita State Shocker, Fred VanVleet to fill the starting point guard role.

Assuming they resign Gary Trent Jr, Toronto’s main problem is their bench. VanVleet, Trent, OG Anunoby, Pascal Siakam, and Chris Boucher make up a formidable starting five. After that, there isn’t much. They need to use this pick to grab whoever they see as the top player left.

I think the Cavs should take a power forward here. Cleveland should be able to pay the tax that would come with matching any offer for center Jarrett Allen. That would keep their young core of Allen, shooting guard Collin Sexton, point guard Darius Garland, and small forward Isaac Okoro. Their power forwards however are 32-year-old Kevin Love, 27-year-old Taurean Prince, and 28-year-old Larry Nance jr. Drafting a power forward here would set up a starting five that fits the same timeline.

Due to the colossal hissy fit of James Harden that gave us the Super-Nets, the Rockets are not in good shape. They need anything. For now, Houston’s point guards are a broken John Wall and DJ Augustin, shooting guards are Avery Bradley and Eric Gordon, small forwards are Danuel House, Kevin Porter Jr, and Jae’sean Tate, only power forward is Christian Wood, and center is no one. Houston should draft the best player left.